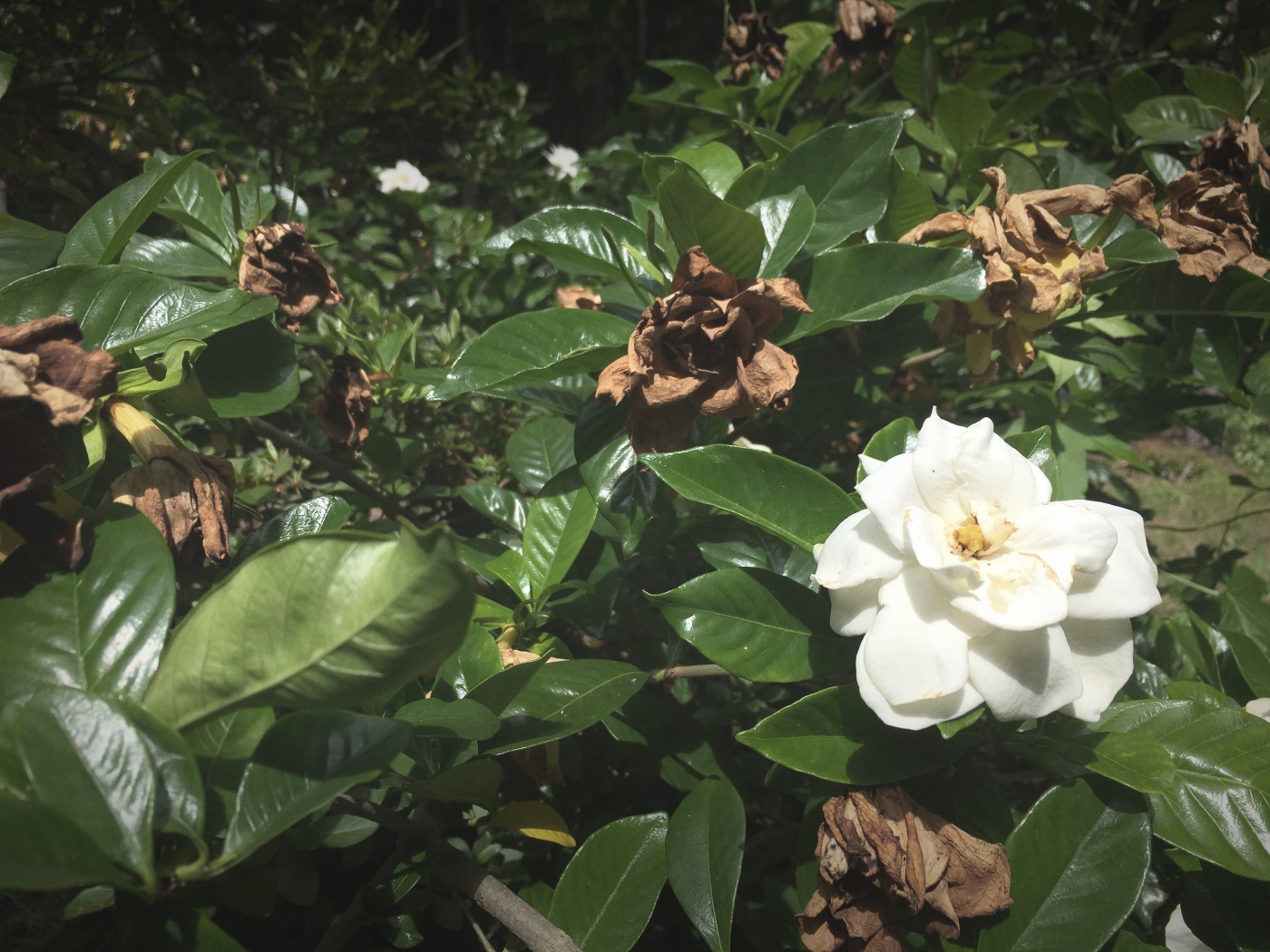 CG | I’ll be completely honest: I’d never even considered the gardenia as a concept until I heard Dexter Romweber of the Flat Duo Jets inexplicably chanting the words “pink…. gardenia” during ragged breaks in the blazing rockabilly song of the same name.

I was led to the Flat Duo Jets by way of the 1987 documentary Athens, GA: Inside/Out, which documented the Athens music scene. I sought it out on VHS because I’d heard that the B-52s and R.E.M. were featured in the film, but ultimately it was Pylon and the Flat Duo Jets who made a lasting impression on me. I was especially impressed by Dexter’s unhinged musical style, as well as his manic personality and thrift-store sensibility.

In my mind’s eye, the pink gardenia in the song was something akin to a camellia. I imagined a sweaty, slightly staggering, possibly half-drunk Dexter showing up at trim Georgian Revival home to pick up a date far above his social standing, with a pink gardenia pinned to the ratty, soot-black jacket he wore throughout the Flat Duo Jets’ appearances in the film. The whole thing was overlaid with a cartoonish Ed Roth patina.

Had this been in the age of the internet, I’d have Googled the “gardenia” and thought to myself “Oh yeah, I’ve seen those before! OK, so it’s not a camellia!” As it was (1990 or so), I became mildly curious about the flower and filed it away to fester  in the back of my mind with the rest of the “should probably investigate further” items.

I assume gardenias were commonplace in Montgomery when I was growing up. I vividly recall specific examples of other archetypal Southern plants: a wisteria vine that shot up a telephone pole and complicated itself into a nearby pine tree, lantana threaded through the overgrown front yard of the abandoned house across the street, brilliant pops of color from the azaleas in our own front yard, kudzu gone rampant in the subtropical humidity. And everywhere, of course, the omnipresent magnolia. But somehow, the gardenia escaped me.

It’s hard to believe something that looks
like a cross between a dirty diaper and
the Cryptkeeper can smell this good.

The shrub itself is unassuming, which may be why I never noticed it on my own. Waxy evergreen leaves cradle floppy, cream-colored buds that turn a tea-stained brown around the edges, inevitably devolving to a crusty dark brown husk. But if the gardenia lacks in style, it more than makes up in scent. In fact, the worse the blooms start to look, the more richly scented they become – an evocative scent as strong and distinct as your first taste of Strawberry Hill. It’s not quite what you’d call “sickly sweet,” but it’s pretty damn close – like a tea olive turned up to eleven. It’s hard to believe something that looks like a cross between a dirty diaper and the Cryptkeeper can smell this good.

It wasn’t until years after Dexter first piqued my interest that I finally identified a gardenia in the wild, and after that I noticed them everywhere. At this point I know I should have a great payoff for my first encounter with a gardenia, but funnily enough, I can’t precisely recall that moment. It could have been during a summer visit back to Montgomery during the time I lived in Northern Virginia, or perhaps it was during a short stint in Birmingham after returning back South.

But it sounds better to say I first caught a trace of that redolent fragrance on an early-morning walk home from the Chukker in Tuscaloosa, so let’s go with that. Picture me – almost a decade later – as the very embodiment of the staggering, half-drunk caricature of Dexter from my teenage daydreams, literally stumbling across my first trace of that redolent bloom in the early morning hours between 6th Street and 8th Avenue.

Whatever the case, gardenias have since become one of my favorite Southern signifiers. I’ve since learned that the gardenia has been popular as a boutonnière for some time, which gives at least a bit of credence to my youthful visions. But as it turns out, there’s no such thing as a pink gardenia per se; people seem to get camellias and carnations confused with gardenias, although the smell test would seem to be a dead giveaway.

When my wife and I bought our first house together, I was delighted to find a gigantic, unruly gardenia in the back yard that had grown higher than my head and about six feet around. I neurotically researched how to prune it but ultimately decided to leave it alone for fear of making a mess of it. Later we moved into a new house with three modest gardenias in the front flower bed. I’m more confident now, but I prune with a light touch. As much as I try to avoid over-the-top Southernisms, it’s hard for me not to trim a single bud and place it in a vintage glass bottle at my daughter’s bedside.

And now that I’ve found the gardenia at last, I point it out to anyone I happen to be with when I run across one: “Oh! Oh man, a gardenia!! Do you know what this is? Have you smelled one of these before? Have you ever heard the Flat Duo Jets?”

3 thoughts on “The Squalid, Rockabilly Flower of the South”