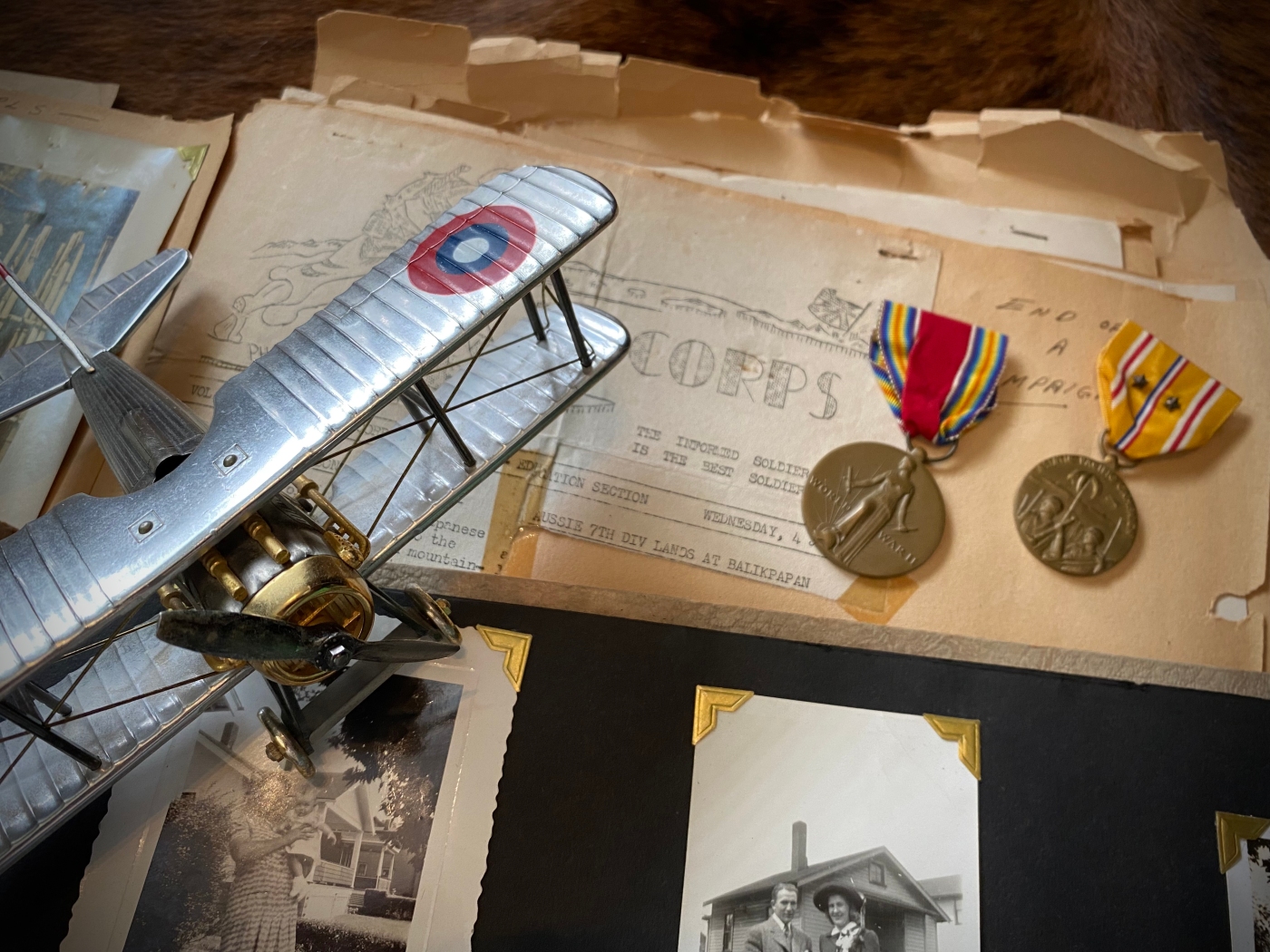 SG | The other day, my brother, Craig, reached out to our mom and me about a sweater.

“Do we still have dad’s letter sweater from Bishop Flaget?”

He remembered the name of our dad’s high school in Chillicothe, Ohio, knowledge I had never previously possessed. Craig had worn the sought-after sweater on “’50s Day” at school once, and for a high school production of “Cheaper by the Dozen.” The general consensus was that I would have the sweater, but I do not. In this case, we let it get away.

“Don’t let it get away,” our grandfather, Pop, would often admonish when passing along a family artifact of some sort. When we were younger, these things were prizes to be coveted. A war medal passed to my brother once filled me with such a strong sense of jealous longing that our mom bought me my own — a military-style brooch that also likely passed for high fashion in the JCPenny ladies section of 1984.

It did the trick, and ended up in a small black chest filled with polished gemstones, found pieces of costume jewelry and novelty erasers.

Now I have boxes of these heirlooms that were once so rare to possess: World War II journals from Grandad that I hope to transcribe, describing his time in the Pacific; Pop’s aluminum hard hat from his work on the Manhattan Project; a metal biplane model that I had longed to play with as a child but always sat high on a shelf in Pop’s office.

We have larger pieces around the house, including art from old family friends, a modest longcase clock — what I assume would be considered a granddaughter clock — and an ornate mirror with a gold-painted wood leaf frame. My wife and I have hung the mirror in prominent spots around our houses over the years, and it’s currently watching over our dining room table. It once hung over my Great-grandmother Louise’s mantel, where Pop lived when he was young (and where my brother and I grew up, incidentally). My parents had it in the same spot when they moved into that house, before passing it to my grandparents. I would often admire it as we gathered in their living room after Christmas Eve dinner. Since then it’s survived a move with us from Alabama up to Virginia, then down to our current home in North Carolina.

I have more recent heirlooms, too, that were scattered between my mom, my brother and me after Dad died. At the moment, these carry the most weight. His Auburn hat, which I wear often and somehow fits perfectly, despite the fact that he always seemed so much bigger than me. An Auburn blanket, which had laid across his feet in the hospital room before he died. His drill, which I use almost weekly.

The importance of these things isn’t lost on me, but the preciousness of it all has faded as I’ve grown a little older. It all started when yet another cherished piece of Auburn gear, pajama bottoms of my dad’s (which, yet again, miraculously fit me), became too threadbare to keep. They’d run their course. I threw them out, and it hurt a little, but that was when I realized it was okay to let some things get away. The important thing is, I had used them. I had enjoyed those pajama bottoms, as opposed to keeping them folded away in a drawer for years.

My son, now seven years old, covets these heirlooms with the same passion I once had. He’ll take out a forestry tool his great-grandfather once used, its holster still marked “Paul Gates Jr.,” and marvel over it before carefully returning it to his closet. My wife and I do try instill in him a respect for such things, but there’s a balance to strike. That metal biplane model? It’s on his bedside table right now. And you know what? He’ll play with that thing, and it’s great, despite the inevitable broken bit or loose screw.

There are those heirlooms that deserve a place of honor on a shelf, or even stored with care to be handled gingerly on rare occasions. But most of it, I’ve come to realize, should be used, played with, and given new life, made a part of our family today as it was 50 or more years ago.

It’s okay to let some things get away. After all, as hinted at by the gleam in my son’s eye when I unbox a new power tool: We’re generating future heirlooms every day.