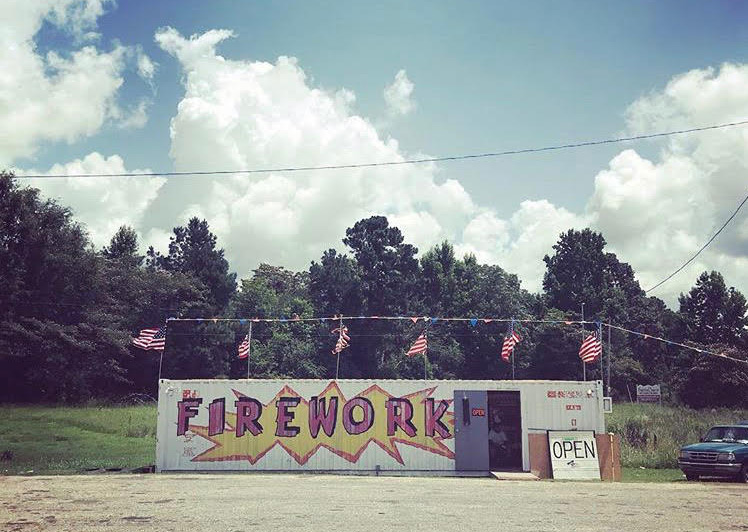 SG | In my grandparents’ boathouse on Lake Jordan, northwest of Wetumpka, Alabama, there was a three-foot long span of one-inch metal pipe leaned up near the doorway. You could find it there year-round, except for one day when it was called into service: the Fourth of July. On that day each year, it would be carried down to the soft, wet grass behind the leaning cement block retaining wall and hammered in as the perfect bottle rocket launch point. Countless rockets were sparked out over the lake from that pipe, and as my brother and I got older, we joined in firing an equal number of fiery Roman candle balls into arcs over the water.

We held on tight to that tradition, even up to our family’s last year there. My brother and I made a trip to Big Daddy’s Fireworks for a healthy assortment of ordnance, later orchestrating the night’s show from the dock. Well away from our dad and the oxygen tank that helped him cope with the lung cancer that would take him from us within a month.

Every now and again we would see a big fireworks show — once on a hot night after a Montgomery Biscuits baseball game — but for the most part, we relished our small displays.

I carried that tradition with me overseas one summer, when my friend Matt and I were working at a Scout camp north of London. With our Independence Day approaching, we explained a desperate need to somehow find fireworks out among the villages and hamlets of Essex. Through a friend of a friend, one of our buddies did, indeed, find a fairly shady fireworks connection. Though the box of bottle rockets and sparklers we procured may have paled in comparison to Big Daddy’s stock, it was enough to enable us to march out into a field that night, our British counterparts in tow, and properly celebrate our independence on the Queen’s own soil. The symbolism of the event was wasted on no one. We made sure of that.

Now I’ve seen my share of big, epic shows over the years. At a national Boy Scout event in 1993, none other than Lee Greenwood belted out “God Bless the USA” onstage as the sky was painted with showers of light. That’s about as ’Merican as it gets, right there. I’ve seen fireworks in New York a few times, once with my wife, Kelly, on a boat out in the Hudson. That’s pretty dang epic, too. But one that may have impressed me more than others was in Denver, after a Colorado Rapids game (their soccer team). After the big show over the ticketed crowd, Kel and I wandered out to the open-air walkway rimming the stadium. As our eyes adjusted to the dark, we gazed out over the front range and began to notice hundreds of small pops of light, low to the ground. These were the fireworks displays from countless driveways, patios and quiet streets. These were the celebrations of the many, viewed as one, marvelous spectacle.

I’m holding that memory close this year. Things are different in our country right now. Most of those big fireworks displays have been cancelled, and that’s okay. When we’re at our best, one of the things we excel at in America is celebrating what we have in common, despite our differences. We fire those Roman candles off from the dock in our own way, and wander out into the driveway to write our name with a sparkler. Or maybe we just take an extra moment to plant a flag in the grass outside the front steps. Whatever it is, it’s about us as individuals coming together to rejoice in our country and the fundamental ideals it stands for.

So have a safe and happy Fourth of July, however you’re able to celebrate it. And to whoever currently owns my grandparents’ lake house: that pipe is for fireworks.